In 1992, the hundred-year-old company no longer had a member of the founding family in its management, and the Austrian company Steyr-Mannlicher stood ready to acquire it. However, in the spring of 1993, two well-known figures from Germany’s arms industry stepped in and saved the day. Wulf Heinz Pflaumer and Franz Wonisch, managing partners of the Arnsberg-based Umarex Group, took over the venerable Carl Walther company, thus keeping it in German hands.

In 1993 the Arnsberg company had a strong financial position and was already the world’s leading vendor of gas signal guns. When directors Wulf-Heinz Pflaumer and Franz Wonisch took the helm in Ulm, they gave the employees a promise that let them breathe a sigh of relief: all profits earned by Umarex in the previous year would be invested directly in Walther – opening up prospects for a secure future.

With their purchase of 90 percent of the Walther shares (the rest remained with Ira and Jürgen Walther), the master gunsmith and cutler Wulf-Heinz Pflaumer and the electrical engineer Franz Wonisch came full circle: their company had been founded using the drawings of the engineer Walter Riem, who had designed the Perfecta blank firing pistol while working for Fritz Walther in Zella-Mehlis. Walter Riem and the brothers Karl and Paul Mayer were business partners when Wulf-Heinz Pflaumer joined Mayer & Riem KG in 1972, first as a fully authorized signatory and manager. Thus the company, which had been making Perfecta pistols in Arnsberg-Neheim since 1952, began its rise in 1972 to become the world’s leading vendor of blank-firing guns. In 1979 it acquired Reck Sportwaffenfabrik Karl Arndt and for a short time took on the name Uma-Reck. This was later changed to Umarex, a name that was easier for international customers to understand. Wulf-Heinz Pflaumer had been a managing partner since 1973 and was in charge of marketing and sales. In 1979 Franz Wonisch also became a managing partner, with responsibility for engineering and finance.

By obtaining numerous licenses from makers of well-known firearms, Umarex was able to manufacture blank-firing replicas of famous models that could be sold over the counter. And now, by acquiring Walther, it was finally able to manufacture the top-selling Walther PPK with the original banner logo. 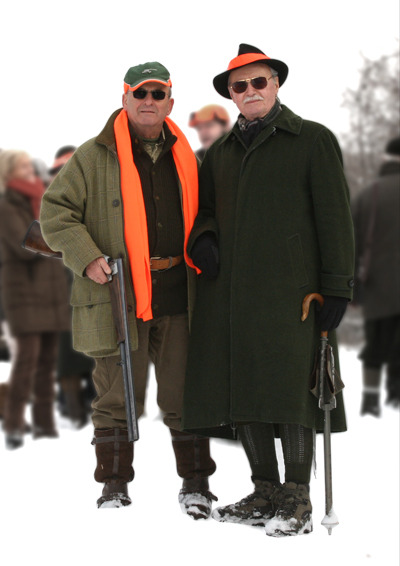 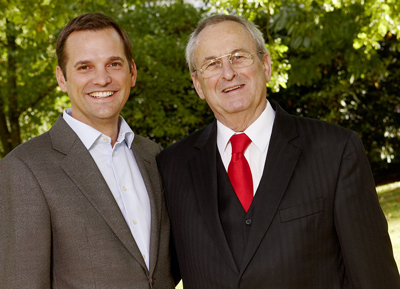 Walther’s new shareholders went right to work. In 1994, the new LGM-2 match air rifle was put to the test at the German Championships, which were held at the Olympic shooting range in Munich. This was also the venue for the Walther Cup. Here 20 air-rifle teams from all over Germany competed for valuable prizes using LGM-2 air rifles provided by the company. The finalists were chosen from more than 1,000 teams, and after the victory of the “Bund München” team the competition focused on a very special first prize: a specially equipped “Walther Cup” Mercedes C180 Sport. The happy winner was Hannes Hirschvogel from Germany’s national team. 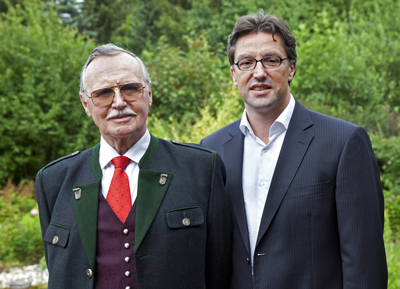 Having experienced a number of difficult years, Walther was now back in business – and where it had always been strongest: as a maker of pistols. At the IWA in 1996 it surprised the industry with a completely new large-caliber pistol, featuring a polymer frame instead of the traditional frame made of steel or light metal. Pflaumer and Wonisch had successfully recruited Horst Wesp, the technical director of Steyr-Mannlicher, as the new chief designer. The Walther P99 developed by Wesp and his team was revolutionary: it had a hammerless striker system with a decocking lever in front of the rear sight and variable trigger systems. The latter feature was to become especially attractive to future customers with large-volume orders: they were able to choose between double action / single action, a partly pre-cocked system, and double action only. The P99 also had innovative ergonomic features: a double-column 16-round magazine with a width of only 26 mm, interchangeable backstraps for different hand sizes and a practical ambidextrous magazine release lever integrated in the trigger guard.

In addition, Walther regained its status as a top name in international target shooting. An important role was played by the cutting-edge LG300 family, including the powerful LG300 Dominator for the increasingly popular sport of field target shooting. Another favorite was the KK300 small-bore rifle. Among the handguns the LP300, the SSP sport pistol and the GSP Expert, an updated version of the already legendary GSP, were especially admired by sport shooters. 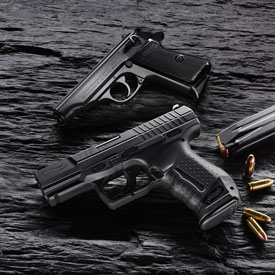 The legendary Walther PPK and below the futuristic Walther P99

After resumption of production in a number of product areas and new business growth, it became apparent that the existing facilities in Ulm could not be expanded as much as needed. Together with the city of Ulm, mayor Ivo Gönner and Ulm’s business development agency, the company therefore found suitable property in Lehrer Feld, outside the city. A major advantage of this location was its access to the nearby autobahn. In 2004, construction began on a modern new building with 12,000 square meters of floor space. A year later the facility was ready for use, and in 2006 it was dedicated on the occasion of the company’s 120th anniversary. The relocation gave Walther a chance to optimize its machinery and equipment, and it created space for meetings, product presentations and on-the-job training.

In 2006 a new business opportunity arose. Walther succeeded in acquiring the trademarks of the Swiss sporting weapons manufacturer Hämmerli. Founded almost 150 years earlier in 1863, the company had been a stock corporation since 1947. It had changed hands several times after being sold in the late 1990s by the Schweizerische Industrie-Gesellschaft (SIG), which had divested itself of all arms companies. Walther and Hämmerli already had connections that reached back for decades. After the war, the Swiss company had manufactured Walther’s Olympia sport pistol under license because occupation laws prohibited the manufacture of firearms in Ulm. After the integration of Hämmerli and relocation of the warehouse and some machines to Ulm, Walther was able to continue making a number of Hämmerli’s world-famous products and even introduce new models. Today, products like the Hämmerli AR20 air rifle and the AP20 air pistol are addressed to ambitious beginners and gun clubs that need high-quality sporting arms at a reasonable price. One such product, the X-Esse, was considerably enhanced this year, and the frame is now milled from a solid block. In terms of design and function, by the way, it can be seen as the great-grandchild of Walther’s famous Olympia pistol of 1932 – a truly fine pedigree. 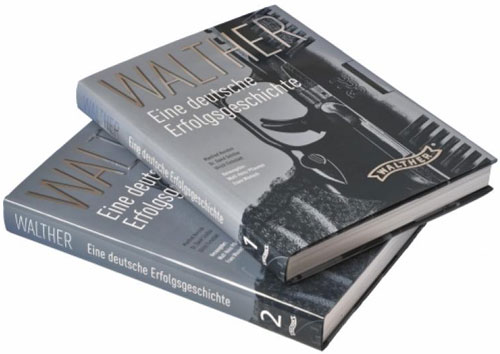 Walther – A German Success Story
The magnificent two-volume work published in 2012 to commemorate the company’s 125th anniversary weighs a full six kilograms. On 1,073 pages, authors Manfred Kersten, Dr. David Th. Schiller and Ulrich Eichstädt set forth the history of Carl Walther and his world-famous company, and they don’t just pile up facts. By clearly structuring it according to firearms , they create a reference work that makes it easy for the reader to find out about individual models. Each section also contains tables with technical data. These richly illustrated volumes contain many images that have never before been published, some of them contributed by the family.